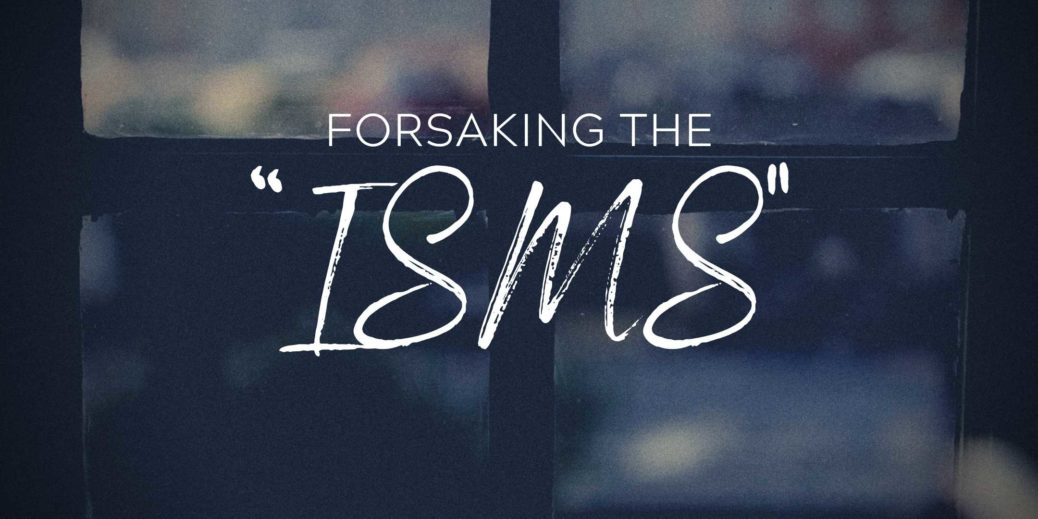 Conserving, of course, is about the desire to preserve or to steward resources. Common usage is now more about ideology, as one dictionary defines: “holding to traditional attitudes and values and cautious about change or innovation.”

Liberal, at the root, should suggest generosity. It has come to be used to describe those who are “open to new behavior or opinions and willing to discard traditional values.”

These kinds of developments in meaning can happen in a couple of ways. One of the ways is when ideology gets ahold of language for the purpose of manipulation. Good words and positive ideas can become weaponized in power-based struggles for influence or control. In some circles, all you have to do is label someone “liberal” in order to dismiss them from the conversation. The converse can also be true.

Another way is when language “drifts” under the influences of culture, and although ill-will is perhaps not intended, harm is done when once-useful words become conversation-ending signals (in the hearer’s interpretation) of one’s position or posture. Words are powerful and words matter.

In our current cultural location (thinking of USA/Canada particularly), the Church of Jesus Christ is struggling to find its voice. It’s no wonder, for too often the Church sounds more like the anxious and angry world than it sounds like the peaceable kingdom of Christ Jesus. Unfortunately, Christians are too often reaching to the tactics of the world rather than to the way of Jesus for how we navigate our differences.

Our task at Nazarene Theological Seminary is to help raise up theologically reflective, pastorally wise, and peace-seeking leaders of the church who know how to navigate divisive times by modeling how to avoid being drawn toward the undisciplined comfort of extremes. Under the sanctifying work of the Holy Spirit, we want them to know how to reflect the non-anxious presence of Christ that bridges the polarized categories of conservative and liberal.

Religious conservatism for its own sake is an idolatry. It imagines that faith can be secured by a tight set of doctrines or affirmations, rather than by Christ himself, who is always on the move; utterly reliable and trustworthy, yet often joyously unpredictable. When the sound of “renewal” or “revival” is angry and combative, it is not being led by the Spirit. When actions that are named “protecting” become manipulative and fueled by gossip, it is actually sin. There is a conserving kind of work that is necessary and healthy, but it is no “ism.” It is the work of taking everything we wonder about to God, through the Scriptures, by the power of the Spirit and in the life of the church, in order to know if it looks, sounds, and acts like Jesus.

Religious liberalism can also become an idolatry as it imagines that sovereignty of the individual must be protected in the pursuit of freedom, rather than the “upside-down” way of Jesus which finds true freedom in the laying down of one’s life for the sake of the other. It can so easily be motivated by self-interest, independence, or liberty that shirks responsibility. The gospel is indeed liberal in its embrace of “whosever will” (Rom. 10:13), but again, it is no “ism.” It is the willingness to allow difference to fade in light of the greater good of unity and love (John 17).

You see, it’s the “ism” that becomes problematic. “Isms” sometimes speak of tightly held (read self-centered) convictions that find their root in self-protection or self-justification rather than in love which is always moving toward laying down its life in service to the other.

Rev. H. Lamar Smith wrote, “The older I get the more I realize that attempting to control fellow humans is evil. We have seen those who want to control! They lurk inside families, churches, nations, companies, clubs, neighborhoods, etc. They transform themselves into gods, but they are unlike the one true God, totally misunderstanding Him and how He functions in the world.”[1]

What if our calling and task as God’s people is not to stake out ideological or even theological territory against one another? What if our calling and task is not so much to “defend the faith” as it is to “live in harmony with one another?” (Romans 12:16). What if God is calling us to repent from the use of labels like conservative or liberal and rather do the real work of living together as an answer to the prayer of our Lord? Jesus prayed for us, “that they may be brought to complete unity” (John 17:23).

If the Church of Jesus is to find its way in a post-Christendom world, we need a new pathway that leads us away from the tools of manipulative control and toward the tools of towel and basin.

Conservatism must give way to clarity and truth for the sake of love.

Liberalism must give way to authentic generosity for the other.

Let us forsake “isms” and embrace the work of liberally conserving the gifts of the Spirit who is working to lead us more and more into the realities of new creation, the reign of God in Christ Jesus, through whom we and all of creation can be forgiven, healed, and made new.